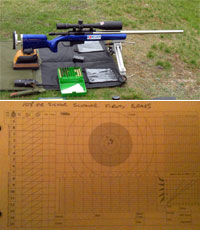 Just wanted to thank you for your help and send you a couple of pictures of the rifle and a score card from the 1000yd range at Bisley last weekend. Very pleased with the results as I’m still working on load development and bullet selection.

Thank you for your time when I collected my rifle (RPA Woodland Stalker .308) from you a week or so ago. I called in at
Chris Potter’s for sight mounts but they didn’t have any that would work so I failed to get the rifle shot as intended at Wadhurst. I actually did not get onto a range until yesterday when I shot it for the first time. I used a 100 meter underground tube range and took three shots to zero it from the bore sighting I did when fitting the sight.

Next 3 shots with sound moderator off to check difference in MPI achieved a ‘clover leaf’ group ¾ of an inch low and ½ an inch right of moderated MPI.

To be serious, the rifle is a joy to use, comfortable and above all very accurate. Thank you very much for the prompt and professional way that I have been dealt with.

What I would like to say about the .243 Woodland Stalker is that it is a fantastic rifle. After zeroing the rifle in with around twelve shots of Federal shock 70grain ballistic tip. At 125 yards I achieved a very close group. Two of the shots were touching and the third was just a few millimetres above! The rifle is unbelievably comfortable to shoot and has given a massive confidence boost in my shooting ability. The length of the rifle including the moderator makes it easy to carry through woods and getting in and out of high seats is a breeze. I would strongly recommend this rifle.

“I purchased an RPA-CG 2000 chambered for 308 Win in 2001 and since then I have both won and come in the top 3 places in numerous regional championships in New Zealand in my grading, also a second placing in my grading at Trentham rifle range NZ in 2003. My RPA action has performed faultlessly since the day it was first shot, and is now on its third barrel.” 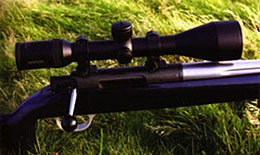 “Robin’s Kit. The fox’s enemy is Robin’s Rangemaster Precision Arms .243 with 26in fluted barrel and custom blue paint. “Made to order, it took about three months to come,” says Robin. “I’ve had a few rifles over the years and I had a RPA before, but sold it as it was quite heavy. I soon relised that was a mistake. I missed the accuracy and the trigger action which I was used to, so decided to get another – this time a custom. I also decided to match the rifle with a top scope, so I have a 2&#189- 10×56 high grade illuminated Swarovski coupled with quick release mounts, a T8 Reflex moderator and Harris bipod. I’m over the moon with it and haven’t looked back since.”

For the first time in known records a full-bore target rifle shooter has shot a perfect individual score in a ‘Queens II’ course of fire. Jon Underwood shot 150ex-150, with all 30 of his shots hitting the central V-Bull, during the Peek match of the Surrey Open on 20th September at Bisley. That is 50.10 at 300 yards, 500 yards and 600 yards with no wind coach, no hand rest and no telescopic sights. Surrey Rifle Association member Underwood used JHC 155g ammunition in his RPA Quadlock Rifle to post his amazing score. He is well known around Bisley, with notable successes as Grand Aggregate winner in 2005 Imperial; winner of all three stages of the Queen’s Prize in 2006 and numerous international honours (including a recent England Team tour to the USA).

“By 600 yards I was getting a little excited by the prospect of scoring a complete HPS (highest possible score),” he said. “But it wasn’t like winning the Grand or the Queens though – there was far more pressure at both those shoots – and I hadn’t got to the stage where the front sight of the rifle was dancing around uncontrollably! That’s partly because I have shot a number of 50.10s before, partly because I was quite busy helping to organise the competition and running stats and partly because of some things I learned in America, just watching how calm and methodical shooters are there.”

As expected, Underwood went on to win the event and also the Surrey County Championship. He is now focused on trying to get selected for the England Commonwealth Games team for Delhi in 2010, for which he is on the shortlist. The highest ever score posted in the actual Imperial Meeting Queens II event is 150.28, shot by Scotland’s Iain Robertson in 2002.

“Using my favourite standard load, sub half-minute groups are the norm. In short, I am extremely happy with the Rangemaster’s consistent performance, the quality of manufacture and ease of operation. I am also very impressed with the efficient muzzle brake.”

“RPA Hunter with a Thumbhole stock… This rifle is simply gorgeous!”

“After weeks of searching I contacted my local firearms dealer to help with my locating a part for my rifle… they referred me to ‘Rangemaster Precision Arms’ but I thought this would be the last I heard… a few days later I received a package containing my much-need part and a note of ‘with compliments’… to say I’m impressed with your customer-service is an understatement… in this day and age it’s rare to find a company that cares about the little things.”

“Fox-shooters are interested in brands and they have already established a pecking-order… the ‘RPA Interceptor rifle’ is the current high-roller… with several other companies vying for 2nd place.”

“I have just received my RPA 50CAL action… THANK YOU for such an awesome piece of equipment. It is far the best built and designed 50Cal action I have ever put my hands on!”

“…beautifully engineered… a great show piece for demonstrating the innovative and precision engineering which is at the heart of RPA’s products.”

“May I just point out something… which to you will probably be obvious… your rifles are quite special and are works of art in their own right… a cut above the mass-produced rifles that are out in the market place… I believe that your customers, myself included, deserve attention to detail… every-time… in regard to my other rifles there is no comparison.”

“My rifle… an F-Class 308 was delivered with a week to go before my competition and what a thing of beauty… the finish… the build quality… the bolt… the action… and what a trigger… Everything about it was absolutely superb!”

This website uses cookies to improve your experience while you navigate through the website. Out of these, the cookies that are categorized as necessary are stored on your browser as they are essential for the working of basic functionalities of the website. We also use third-party cookies that help us analyze and understand how you use this website. These cookies will be stored in your browser only with your consent. You also have the option to opt-out of these cookies. But opting out of some of these cookies may affect your browsing experience.
Necessary Always Enabled
Necessary cookies are absolutely essential for the website to function properly. This category only includes cookies that ensures basic functionalities and security features of the website. These cookies do not store any personal information.
Non-necessary
Any cookies that may not be particularly necessary for the website to function and is used specifically to collect user personal data via analytics, ads, other embedded contents are termed as non-necessary cookies. It is mandatory to procure user consent prior to running these cookies on your website.
SAVE & ACCEPT